The very first designs that came about were analog designs, a Vacuum Tube amplifier is an example. Analog is the representation of data or physical parameter in an accurate and precise decimal number like + 72.182 mV. The greater the resolution required, the more demanding is the design for achieving high accuracy and low drift. Digital circuits have only two voltage levels, high and low, the third state of floating, Hi-Z or high impedance is only for multiplexing or sharing a bus. This is done so that devices dont drive into each other and it is also used in external port drivers.

As an analogy, see the conventional water tap as an analog control, an electric light ON-OFF switch as a digital control.

Even in digital, going from a low level say 0V to a high level say 5V is not instantaneous, the side of the square wave or the rising edge is not as straight as it looks. On zooming only the edge, you see that it is also an analog phenomena. The 'square wave' itself appears to be a summation of many sine waves, 'harmonics'. This is because nature is analog, the sine wave is analog, the movements of the planets or even the spin of electrons in an atom too.

"Among the semiconductor products Bob designed are temperature-voltage frequency converters used in groundbreaking medical research expeditions to Mt. Everest in the 1980s. He also designed a seismic pre-amplifier chip used to measure lunar ground tremors in the US Apollo moon landing missions. Among his more memorable designs are the LM331 voltage to frequency converter and the LM337 adjustable voltage regulator."

One important thing to learn from the incident that lead to Bob leaving this world. Do not use Old Cars on Risky Terrains like Hills, Old people should be accompanied by one young escort when traveling to an Emotionally sensitive occasion. - delabs Note 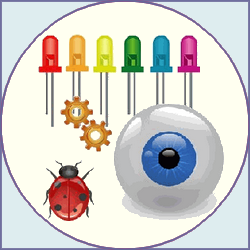